WOW!  The weather for our 2020 Fish Fry Open was a weatherman’s delight.  On Friday, doubles shooting no sooner finished when the darkening clouds started leaking.  Saturday brought wind and heavy rain the likes of which a number of shooters had never competed in before, nor would anyone wish to.  Sunday, what can I say, it was nearly perfect.  Sunny skies, cooler, and very little wind.  A recipe for good scoring.

17 shooters competed in Friday’s doubles presented by the Union City Sportsmen’s Club saw Matt Lenehan bust a 97 for the win with Kenny Riddile winning the shoot-off of 95’s with Joe Fisher, Bernie Lenehan, and Mark Kinner.  Bernie then claimed A1 with Tim Botwright taking A2 with his 94.  Joe then went on to win the shoot-off with Mark, taking B1 and Mark B2.  Gary Trilli snagged C1 with his 86 with Charles Lombardo’s 89 getting D1.

Saturday’s mornings 12 ga event sponsored by American Legion LeBaron Post 327 brought 20 shooters together under dark skies and and light rain, at least to start.  Conditions would just deteriorate from here.  Bernie Lenehan conquered the elements and ran them all to take the 12 ga title.  Kenny Riddile was R/U with a fine 99.  A1 went to Josh Crofutt with a 96 with Paul Huckno’s 95 taking A2.  Matt Lenehan grabbed B1 with his 97 while George Kirik took B2 breaking 96.  C1 went to Mark Kinner with a 94.  Ron Kopf took D1 with his 83 while John Callery snagged E1 with a 81.

Saturday afternoon had 17shooters have a go at the 20 ga event presented by Pet Supplies Plus.  Ernie Anderson’s 99 took the champion spot with Josh Crofutt winning a shoot-off of 96’s against Kenny Riddile for runner-up.  Kenny then claimed A1.  Bernie Lenehan won AA1 with his 95.  B1 was claimed by Ron Johnson who had 95 with Matt Lenehan breaking 93 for B2.  Charles Lombardo took C1 shooting 91 with Ron Kopf’s grabbing D1 with his 87.

Sunday morning brought together 16 shooters to vie for the 28 ga event sponsored by Jeff Quinn Insurance.  Again the cream of this shoot rose to the top.  Bernie Lenehan’s lone 100 gave him the 28 ga championship.  A shoot-off of 98’s between Matt Lenehan, Kenny Riddile, and Mark Kinner was needed to establish the runner-up.  Kenny came away with the runner-up spot, Mark took A1 and Matt A2.  Dale Snow claimed AA1 with his 92.  B1 went to Ron Johnson shooting a 95.  Gary Trilli claimed C1 with a 95 while Ron Kopf cashed in with his 91 for D1.

Sunday afternoon saw the 410 bore event again sponsored by Pet Supplies Plus.  15 shooters went at it too see who might claim the HOA title, money, and coveted duck decoys.  Matt Lenehan’s 98 was good enough to claim 410 champ.  Kenny Riddile shot a fine 97 to give him the runner-up spot.  Josh Crofutt took AAA1 with a 93.  Dave Wilke’s 96 was good for A1.  Ernie Anderson claimed B1 breaking 91 while Ron Johnson bested Tim Botwright in a shoot-off of 89’s to snag B2.  C1 went to Gary Trilli with his 86 while D1 was claimed by John Callery by way of his 83.

Class 1 HOA honors weren’t decided until Kenny Riddile and Bernie Lenehan shot-off their 390’s.  Kenny came out on top after a fine show of skill.  Class 2 honors went to Matt Lenehan with a very nice 386.  As is our custom, a shoot-off between the Class 1 and Class 2 winners is required to determine who had their choice of decoys expertly carved this year by Tim McEntire.  Kenny outlasted Matt so his choice was the female old squaw, allowing Matt to take home the male.  Kenny reportedly decided on the female deke because the male has long tail feathers and he was concerned that it wouldn’t fit in his already crowded trophy case.

A friendly (?) $5 wager is made between Mark Kinner and Tim Botwright whenever they get to shoot together.  Mark came out on top this time so he got to take home the framed $5 bill while Tim is left to go home and contemplate where he went wrong.  Maybe next time Tim! 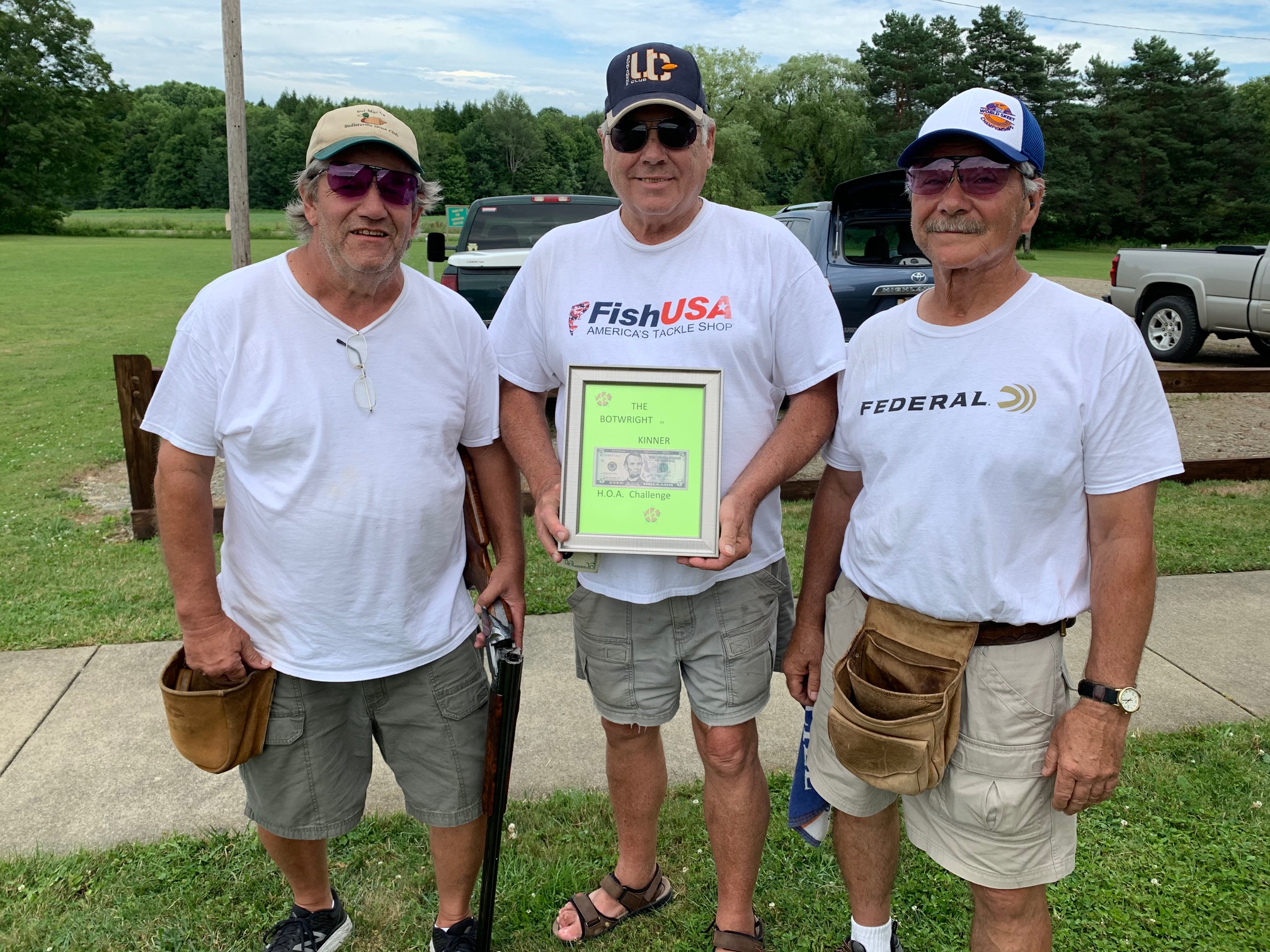 David Minella thought it was safe to stash the money pouch in the oven broiler Friday night (so that it was safe?) until Saturday.  Well, what seemed a good idea on Friday night almost turned to disaster on Saturday.  Mike Wojotecki fired up the oven Saturday to cook potatoes only to shortly start smelling what seemed like plastic burning.  You see, David did not communicate the fact to Mike of his secret stash.  Well, David just happened to hear someone say that Mike had fired up the oven and he also smelled that smell.  “HE DID WHAT” Dave exclaimed!  Only his mad dash to the oven saved the club a bunch of money.  The money pouch had started to melt and the money and checks inside had burnt brown edges and were on the verge of igniting.  Next year a safer place to keep the money may be in order!

A huge THANK YOU to all of the club volunteers who got the club in shape for this event.  David and Steve for pressure washing and staining the wood of the patio, front porch, benches, and gun racks.  Ed and Mike for manning the lunch area.  Paul for his walleye catching, cleaning, and cooking.  Beth and Mike for fixing Saturdays meal.  Bud and Joe for keeping the traps loaded with birds.  Morgan for her expert refereeing along with Stoney and Steve ref’ing the other field.  Mike, Steve, and David for keeping the grass cut.  Thanks again!